John Ross Matheson, OC CD QC FRHSC (November 14, 1917 – December 27, 2013) was a Canadian lawyer, judge, and politician who helped develop both the maple leaf flag and the Order of Canada.

In June of 1946, a British Gentleman arrived in Brockville Ontario, Leeds County to begin his new job as the Manager of the Royal Bank of Canada. His name was George M. Beley.

Mr. Beley and his wife Irene soon became entrenched in the social life of Brockville. When Mr. Beley was not at work or involved in a social event he was buried in research. His research was also his passion, the study of heraldry.

For most of us we do not know much about the study of heraldry, so a brief description may be in order. Heraldry dates back to the 13th century and includes the study of crests, coats of arms, flags, and honours (awards) to list a few of the interests of heraldry.

In 1948 a young, wounded WW2 Veteran and Lawyer arrived in Brockville in Leeds County to set up his Law practice, his name was John Ross Matheson. Mr. Matheson and his wife Edith soon became entrenched in the social life of Brockville.

When Mr. Matheson was not working in his Law office or attending social events with his wife Edith he was buried in research. His research was his passion of heraldry.

Very soon John Ross Matheson (a Liberal) and George M. Beley (a staunch Conservative) were the best of friends and together were entrenched in the study of heraldry.

Over the next 20 years these 2 men became known by the Heraldic Authority in England and Scotland as highly respected experts in this field of study and worked on some very interesting and productive heraldic projects.

One of those projects was to acquire the City of Brockville official Grant of Arms and Flag in 1966. After years of working to acquire their personal “arms” they felt it was time to have a truly Canadian Heraldic Society.

In 1961 John Ross Matheson was elected as the Liberal Member of Parliament for Leeds County (now Leeds & Grenville). In July of 1961 in one of the first meetings with Lester B. Pearson leader of the Liberal Party of Canada, he was asked by Mr. Pearson to begin researching what it would take to bring a National Flag of Canada to fruition when the Liberal Party formed Government in the future. This request was made by Mr. Pearson on that day because he had been informed of John Ross Matheson’s work in the study of heraldry, arms, crests and flags. From this point on Mr. Matheson was recognized as the Liberal Party of Canada’s Parliamentary Flag expert.

The next 3 ½ years proved to be a very productive time for Mr. Matheson’s heraldic endeavours in Parliament and his continual collaboration with his dear friend George Beley. This long-time friendship and heraldic research is the basis of how our Canadian Maple Leaf Flag was brought to fruition in 1964/65 and this is why Leeds & Grenville is the “Birthplace of the Canadian Flag”.

From 1948 until 1966 these 2 amazing Brockville Citizens worked to promote all things heraldic, this was an 18 year work of commitment and passion. And let it not be forgotten that John Ross Matheson was instrumental in the creation and design of Canada’s highest honour “The Order of Canada” a historic Canadian symbol which is also recognized and respected through-out the entire world.

Leeds & Grenville has so much history to be proud of and these 2 men and their accomplishments should be promoted and honoured by each and every citizen of our community. As a point of interest, one of the first individuals living in Canada to be heraldically “Granted Arms” from England was General (later Sir) Isaac Brock. 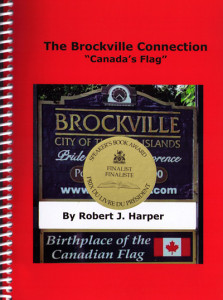 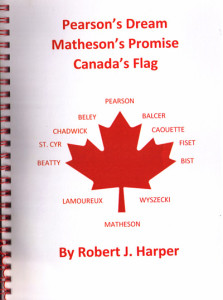 The complete video (includes the two start points on other posts).

On Canada Day 2014 Brockville flew the new 70ft x 35ft Canadian Flag weighing 125lbs from the new 160ft flag pole on the 401 at Smart Centre on Parkedale and North Augusta roads. There was a spectacular turn out and their were many speakers including Mayor David Henderson.

“The idea of Brockville, being the basis of the whole thing, is, is, so very valuable, I really can’t tell you how much I appreciate it” ~ John Ross Matheson

John Ross Matheson (father of the flag) signs a Canadian Flag with the help Robert Harper the Executive Director of the Canadian Flag Education centre.

The Flag-mobile promotes our mission to educate people across the country about the history of the Canadian Red & White Maple Leaf Flag, its origin, its birthplace and it’s father.

At a ceremony in front of the Brockville Courthouse, a street was named in honour of the father of the Canadian flagVideo provided by Dale Elliott and used with permission