We are the leaf, the maple leaf our symbol so dear.
An image of Red and White of which is very clear.
Respect and recognition throughout the globe
Our Flag is our past, our future and our hope,

The “Maple Leaf Forever” is not just a song
It is a Canadian Pledge with power so strong
We are so subtle in pride and our thought
Canadians united are like no other lot,

The work of “many loving hands” created our Flag
Canadians should show our appreciation, and maybe even brag
Our symbol and Country are so unique and like no other
Fly the flag, give it respect and treat it like your mother

Every Canadian should be proud of how we are seen
Respectful admiration and as symbolic as it has been
The National Flag of Canada, truly a gift to all Canadians

The link below to a PDF file will provide a verified true Narrative of the steps in history that brought the Canadian Flag to fruition. 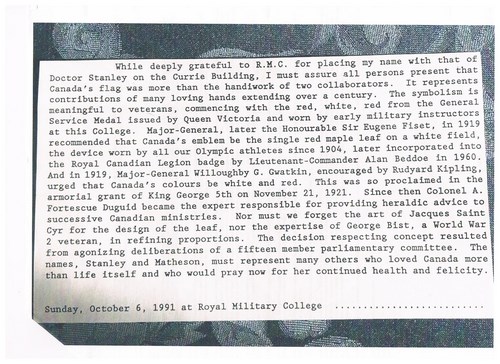 This Canada Flag Day holiday proposition is an “all-party” project, designed for all patriotic Canadian constituents and their MP‘s, whatever their political affiliation.

Now you can make your voice heard. Tell your Member of Parliament to support MP Peter Julian’s Private Member’s Bill (C-337) to declare February 15 or the third Monday in February, Canada Flag Day, a national holiday across Canada.

The Canadian Flag Education Centre is proud to present this chronological / historical account of who and how our beloved Canadian Flag was brought to fruition in 1964/1965. This video is made available with the approval of Historica Canada.

This video contains a part of the Flags Heritage Minute, which was produced and provided by Historica Canada. Historica Canada is the nation’s largest organization dedicated to enhancing the awareness of Canadian history and citizenship.

In an attempt to provide all Canadians with a detailed story of individual contributions of the many loving hands who in some way (some small, some large) were responsible for bringing our beloved Canadian Maple Leaf Flag to fruition. This list is not intended to exclude anyone who contributed in any way to bring the Canadian Maple Leaf Flag to fruition. We are bringing awareness to all Canadian’s, the direct contributions of the individuals and groups with verifiable facts. Chronological account from 1895-96 through to fruition in 1965.

1895-96 Edward M. Chadwick – Lawyer- Heraldry / History enthusiast who first recommended to the Canadian Government  in 1895-96 a National Flag for Canada with the Maple Leaf being the favoured emblem. REF, U of T library

1946 Paul Martin Sr. – Headed a committee which set the standards of a National Flag of Canada, this committee failed to bring forth a proposal.
REF, Government of Canada Archives

1948-64 George Beley – Friend and advisor to John Ross Matheson on all things relating to heraldry, flags and honours from 1948 through 1975 in Brockville Ontario. Mr. Beley was one of the founding pioneers of the Heraldry Society of Canada

1956-65 Lester B. Pearson – Prime Minister and Nobel Peace Prize winner who dedicated his efforts to bring a National Flag to Canada through the Parliamentary process in the 1960’s.  REF Government of Canada Archives

1961-65 John Ross Matheson – Member of Parliament / Flag Expert who was responsible for bringing all of the suggestions, designs and details of the National Flag of Canada to fruition from 1961-65.  REF, Government of Canada Archives, Flag Committee Archives

1963/64 George Bist – Advertising executive who spent many hours communicating his input to Government of Canada personnel relating to the need and design of a National Flag of Canada. It was Mr. Bist’s suggestion of the exact proportions of the two times length as height as well as the white centre section being two times the size of the red borders. He also was responsible for the sizing of the maple leaf to all of the other proportions. REF, Flag Committee Archives

Sept 10th – October 22 1964 Members of the Flag Committee of 1964 – All 15 Members of Parliament who worked diligently to bring a recommended National Flag of Canada to Parliament to be voted on in 1964.  REF, Government of Canada Archives

March 1964 George Stanley – Made the suggestion to John Ross Matheson of a single red maple leaf on a white field be the basis of the National Flag of Canada (recycled Fiset concept) in 1964.  REF, Flag Committee Archives

1964 Alan Beddoe – Government of Canada Artist and Heraldry expert who presented Prime Minister Pearson with his own design for a National Flag of Canada which became known as the “Pearson Pennant” and was the beginning point of the “Great Flag Debate” in 1964. REF, Flag Committee Archives

October 1964 Arthur Lower – Professor Lower was one of several presenters of information directly to the Flag Committee in October of 1964. His moving statements relating to the opportunity to bring unity to all Canadians through a National Flag was most interesting. REF, Flag Committee Archives

October 1964 Fortescue Duguid – Military historian/heraldry expert who presented his input and views of the characteristics and principals of a National Flag for Canada to the Flag Committee in 1964. REF, Flag Committee Archives

October 1964 Patrick Reid – The head of the design team at Expositions Canada who was requested to become involved in the final design and creation of the Canadian Maple Leaf Flag as we know it today. REF Flag Committee Archives

October 1964 Jacques St. Cyr – Mr. St. Cyr was a member of the Expositions Canada design team. He was the creator of the stylized maple leaf as we see it today. His first design had 13 points of the maple leaf and a stem with a slanted base which was used on the first prototype flown in the wind tunnels at the NRC. The 11 points and straightened stem were the final design of Jacques St. Cyr, John Ross Matheson and Patrick Reid completed on November 9th 1964.

Ken Donavan – Working with the team from Expositions Canada, Mr. Donavan was asked to find a company to sew several prototype flags on Friday November 6th, so the Prime Minister could actually fly them over the weekend. Due to the fact it was late on a Friday Mr. Donovan could not find a company to execute this task immediately. He requested his daughter to complete the task because she had a sewing machine and was always ready to help.

Joan O’Malley – On Friday November 6th at approximately 8pm Joan O’Malley began working on 3 prototype flags, she sewed until close to midnight to complete all three. These three prototype flags were then taxied to the Prime Minister for his review.

November 1964 – June 1966 Dr. Gunter Wyszecki (NRC team) – The involvement on the National Research Council of Canada team began in the wind tunnel testing of the prototype flags in November of 1964. Dr. Gunter Wyszecki was also responsible to research the scientific standard of the colours of the National Flag of Canada from February of 1965 to June of 1966. Dr. Wyszecki and his dedicated team of scientists created the very first scientific standard for colour of a national flag. There are more than 500,000 shades of red and this team instituted the exact colour of red we, as Canadians admire in the Canadian Maple Leaf Flag flown around the world today. REF Government of Canada Archives, NRC Archives

December 9th 1964 Leon Balcer – Conservative Member of Parliament from Quebec who requested a motion of closure by the Government on the “Great Flag Debate”.  REF, Hansard Journals

December 9th 1964 Real Caouette – Social Credit Member of Parliament who seconded the motion put forth by Leon Balcer to invoke closure of debate and call a vote on the National Flag of Canada. REF, Hansard Journals

1964-65 Canada’s 26th Parliament – It was one of the most vicious and divisive debates in the history of our Canadian Parliament. The Great Flag Debate raged on for months in the House of Commons. The final outcome was a 163-78 vote in favour of the National Flag of Canada being accepted as the Canadian Maple Leaf Flag on December 15th 1964. This act of Parliament was beyond doubt, one of the most incredible outcomes from a minority Government in the history of Canada, from this democratic process came a symbol, every Canadian can be proud to see as the most respected symbol of Canada in the world today. REF, Hansard Journals

December 15th 1964 Robert Thompson – Mr. Thompson was Member of the Creditiste Party in Parliament in 1964 and was instrumental in persuading members of his party to vote yes on the flag issue. See vote Hansard Journals

December 15th 1964 Paul Martineau – Mr. Martineau was a Conservative MP who worked behind the scenes to convince other Conservative Members of Parliament to vote yes on the flag issue. See vote Hansard Journals

January 28th 1965 Queen Elizabeth II – Proclaimed the National Flag of Canada on January 28th 1965. This was the final piece of a process which spanned more than 96 years in the making. REF Government of Canada Archives

February 15th 1965 Archie Cairns – Pipe Major who officially piped the new National Flag of Canada from the Centre Block into Parliament on February 15th 1965. Major Cairns was one of the world’s most respected and accomplished Canadian pipers. REF, Government of Canada Archives

It was the request of the “Father of our Flag” The Honourable John Ross Matheson that we ensure credit is provided to each and every individual or group who made it possible to bring a National Flag of Canada to fruition. This document is intended to bring awareness to the process, people and institutions which were involved in the National Flag of Canada being brought to fruition in 1964-65.

The Canadian Flag Education Centre is proud to have the opportunity to provide this document to be reviewed by Canadians as a guideline of information both chronological and historical .This is a very simplified and condensed overview of a part in Canadian History which took almost 100 years to complete.

This milestone in Canadian History has provided all Canadians with a symbol which is truly recognized and respected throughout the entire world, the Canadian Maple Leaf Flag is the symbol of our Canadian Heritage.

In Preparation for July 1, 2015 – The 50th Anniversary of the Canadian Flag, Smart Centres has installed the final 160ft flag pole. Robert Harper Executive Director of the Flag Committee speaks about the event.

Video provided by Dale Elliott and used with permission.

Feb 15, 2014, special reception to unveil large painting by Phil Chadwick to be auctioned off.  John Ross Matheson picked from over 1400 Canadian scenes in Phil’s portfolio to be used on the large painting